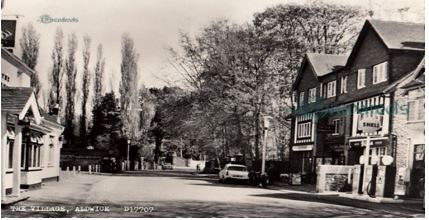 A History of Aldwick

Aldewycke, a tithing of Pagham, appears to have replaced Pagham as the administrative centre of the Canterbury estates by the end of the 14th century and remained in the hands of the Archbishops until June 1542 when Cranmer exchanged it to Henry VIII. Queen Elizabeth restored Aldwick to Cardinal Archbishop Reynold Pole and on his death in 1558 it reverted to the Crown. The overlordship continued to be attached to the Hundred of Aldwick but in 1559 the Manor was granted to Sir Richard Sakevyle, Knight, one of the Queen's Privy Councillors and leading land speculators of the area

In 1397 Aldwick Manor is described as containing 152 acres of arable land and 158 acres of pasture, not including the site of the Manor house, the courts were held there every three weeks. Forty five acres of land known as 'Malemayns'and belonging to Nicholas de Malemayns in 1292, had disappeared into the sea. Last recorded in 1556, a portion remains today at the foot of Dark Lane. The Manor passed through the generations mainly father to son, from the family of John Dingley to Richard, from Richard to John who sold to John Comber. then to his niece and her son. Sir Thomas Miller passed it to his son and ultimately to his son again who sold out to Sir Richard Hotham in 1789. Aldwick farm was separated from the Manor on the settlement of Hotham's estate and bought by William Brereton, relative of the late Lord of the Manor. The Manor, thus deprived of its principal value, passed through various owners and was bought in 1835 by John Ballett Fletcher and was passed to his son William Holland Ballett Fletcher in 1899 when he became the new Lord of the Manor. By this time Aldwick village contained some fine houses and some cottages in Fish Lane and Aldwick Street. By 1886 there was a scattered but tranquil community of approximately 95 families throughout the hamlets of Nyetimber, Willowhale, Rose Green and Craigweil which also came under the Parish of Pagham. There was an iron chapel of ease, an Inn, a Grocer, a Coastguard Station, the beginnings of a postal service and by 1896 a small school. The 1900's brought change. The spotlight was on the village in 1929 when King George V convalesced at Craigweil House from February until May. The  outbreak of war saw the erection of coastal barriers and defences in 1939 and the laying of an air strip to aid the D.day landings in 1944. Later, intensive building covered most of the farm lands for housing. Aldwick became a parochial parish in its own right in 1935.

Aldwick became a Civic Parish in 1985.

The Victorian History of the Countryside of England(University of London Inst. of Historical Research).